While we turn pages of our world known epics like Ramayana, we would read about a time when Lord Ram was able to raise Lord Shiva’s bow ‘गांडीव’ and broke it. This was required as per the want of the challenge. This made, most ardent follower of Lord Shiva, Lord Parashuram very angry. Lord Ram’s younger brother, Prince Lakshman, then requested Lord Parashuram to ignore what has happened and believe that his eyes are closed and hence nothing has happened. Lakshman said, “मूंदे आँख कत्हू कछु नाहि”.

Another world known epic, Mahabharata, depicts the mother or Kaurava’s, Gandhari, who pledged to remain blind folded to show solidarity with her blind Husband, Lord Dhritrashtra. The symbolic of being blind-folded was also to depict that knowingly, she closed her eyes to all wrong that her pedigree was doing.

Both these Mythological epics which also derive and depict a lot about our society, tell us one thing that we as Human beings choose to close our eyes and feel that things don’t exist. Nature isn’t far enough from this depiction where an Ostrich is known to have hidden it’s head under the sand and thinks that it is hiding from a predator. We Human beings follow the same principles. We close our eyes or get easily blind-folded and believe that world is as what we ‘feel’ or are ‘told’ it is.

Lord Dhritrashtra, atleast had a dependable Sanjay who could tell him the truth of what was happening, but in Kalyug, we have become Dhritrashtras and Gandharis who have probably ‘interested’ parties acting like Sanjays and telling us HOAX which we hear for ages and start believing of existence of such HOAX. And soon these beliefs becomes strong facts in our eyes though we continue to remain blind-folded, by choice.

It won’t be wrong to call the “Feminism in India” working like Negative Sanjays who are feeding us with HOAX continuously and unfortunately, we as Gandharis have started believing it.

With this Article, we wish to bring to you the HOAX which are being spread about Marital Rape in India, obviously by few ‘interested’ parties.

For the purposes of this Act, any act, omission or commission or conduct of the respondent shall constitute domestic violence in case it—
(a) harms or injures or endangers the health, safety, life, limb or well‑being, whether mental or physical, of the aggrieved person or tends to do so and includes causing physical abuse, sexual abuse, verbal and emotional abuse and economic abuse; or
(b) harasses, harms, injures …………………; or
(c) has the effect …………………….; or
(d) otherwise injures ………………………..

Explanation I.—For the purposes of this section,—
(i) “physical abuse” means …………………………;
(ii) “sexual abuse” includes any conduct of a sexual nature that abuses, humiliates, degrades or otherwise violates the dignity of woman;
”

“31. Penalty for breach of protection order by respondent.—

(1) A breach of protection order, or of an interim protection order, by the respondent shall be an offence under this Act and shall be punishable with imprisonment of either description for a term which may extend to one year, or with fine which may extend to twenty thousand rupees, or with both.
(2) The offence under sub-section ………………..
(3) While framing charges under sub-section (1), the Magistrates may also frame charges under section 498A of the Indian Penal Code (45 of 1860) or any other provision of that Code or the Dowry Prohibition Act, 1961 (28 of 1961), as the case may be, if the facts disclose the commission of an offence under those provisions.
”
This means that, as per Domestic Violence Act in India:
Ø  ‘any’ sexual conduct is punishable. Yes, ANY.
Ø  Protection order stops the Respondent(s) from committing any act of Domestic Violence, including Sexual Abuse. It also expands to anyone aiding or abetting any act of Domestic Violence. Means, all respondents are liable.
Ø  Breach of Protection Order means jail term of 1 year and also prosecution under section IPC 498A (a penal provision)
Ø  ‘Rape’ in all known and unknown definitions, hence, is a subset of Sexual Abuse.
Ø  AND A KNOWN FACT, ONLY A WOMAN CAN BE A VICTIM UNDER PROTECTION OF WOMEN FROM DOMESTIC VIOLENCE ACT, 2005 OF UNION OF INDIA. MEN CAN NOT BE.
LAW #2: Indian Penal Code Section 377

Whoever voluntarily has carnal intercourse against the order of nature with any man, woman or animal, shall be punished with 1[imprisonment for life], or with imprisonment of either description for term which may extend to ten years, and shall also be liable to fine.

Explanation:
Penetration is sufficient to constitute the carnal intercourse necessary to the offence described in this section.
CLASSIFICATION OF OFFENCE
Punishment—Imprisonment for life, or imprisonment for 10 years and fine—Cognizable—Non-Bailable—Triable by Magistrate of the first class—Non-compoundable.
”

This means that, as per IPC 377 in India:
Ø  ‘any’ ‘against the order of nature’ is punishable. Yes, ANY.
Ø  Imprisonment for 10 years AND fine. Yes, AND.
Ø  Non-Bailable. Yes, only a court can give Bail.
Ø  Since this section explains as ‘Penetration’, by default, men only can be perpetrators.
Ø  Pick the latest formats of Marital issue FIRs across India (yes, most women use one of known formats of their states meaning even allegations are same), IPC 377 is becoming the norm of the day especially post CrPC 41A coming into existence.

Explanation
For the purpose of this section, “cruelty” means—
(a) any wilful conduct which is of such a nature as is likely to drive the woman to commit suicide or to cause grave injury or danger to life, limb or health (whether mental or physical) of the woman; or
(b) harassment of the woman where such harassment is with a view to coercing her or any person related to her to meet any unlawful demand for any property or valuable security or is on account of failure by her or any person related to her to meet such demand.]
CLASSIFICATION OF OFFENCE
Punishment—Imprisonment for 3 years and fine‑Cognizable if information relating to the commission of the offence is given to an officer in charge of a police station by the person aggrieved by the offence or by any person related to her by blood, marriage or adoption or if there is no such relative, by any public serv­ant belonging to such class or category as may be notified by the State Government in this behalf—Non-bailable—Triable by Magis­trate of the first class—Non-compoundable.
”
This means that, as per IPC 498A in India:
Ø  Harassment can be of ‘any’ type and hence INCLUDES sexual harassment too
Ø  It is a PENAL provision
Ø  Another wrong understanding people have, that IPC 498A is about Dowry

”Section 376A. Intercourse by a man with his wife during separation

1[376A. Whoever, commits an offence punishable under sub-section (1) or subsection (2) of section 376 and in the course of such commission inflicts an injury which causes the death of the woman or causes the woman to be in a persistent vegetative state, shall be punished with rigorous imprisonment for a term which shall not be less than twenty years, but which may extend to imprisonment for life, which shall mean imprisonment for the remainder of that person’s natural life, or with death.]
“
This means that, as per IPC 376A in India:
Ø  Rape of a ‘Wife’ by a Husband is part of IPC 376
Ø  ‘during Separation’ is not defined and hence we see this section being commonly used in FIR formats of various states

HOAX 2: Marital Rape, Wife are victims
Let me take you to a report which is from the ministry that talks about women (unfortunately, Government dint bother to do any surveys on this).

Ministry of Women and Child Development, in year 2007, published a report named “Study on Child Abuse: India 2007”. If you search this report, on page 74, you would see this: 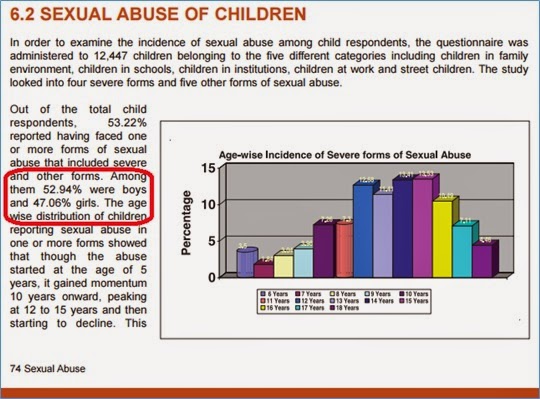 
The state wise distribution is shown on Page 75, as under: 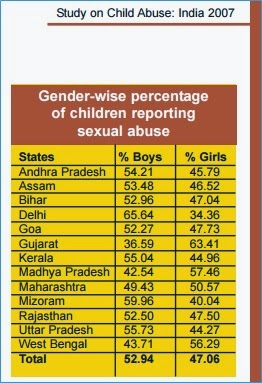 
So, as per the Feminist arm of Government itself, MORE BOYS IN INDIA ARE ABUSED SEXUALLY.


Now, though we can always doubt the veracity of this claim too as Ministry of Women and Child Development has responded via RTI saying “Protection of Men is not Ministry’s mandate”. So it would be safe to assume that a data collection methodology and display by this ministry has to be sided towards women. And hence, this data would have been tweeked in every possible way to be pro-women.


Nevertheless, we still assume that this data is correct and hence, it brings us to a very important fact:
AS PER INDIAN SOCIETY AND LAWS, BOYS, WHO ARE 53% VICTIMS OF SEXUAL ABUSE, BECOME 0% VICTIMS THE DAY THEY BLOW THEIR 18th BIRTHDAY CANDLES.


Because, Indian society and laws doesn’t even assume that men/husbands can be raped.


In various data / surveys, it has always been found that men have been equally big victims for Domestic Violence, Spouse Burning, and even as per above survey, Rape & Sexual Abuse too then Why do we think Husband / Men cannot be raped? Say, even if there is 1 such case, don’t you think that it is unconstitutional for that man to not have law protecting him too?


So, with both the HOAX clarified with reality, I hope you would agree to one fact:

Popular posts from this blog

April 23, 2019
#MeToo, the Digital Mob Lynching legal tool, attacks CJI   Terminated from job, a female colleague, can easily save her job and even seek revenge, is a well known use of the “Protection of Women from Sexual Harassment at Workplace” (POSH) act. We very carefully calls it as a “Use” and not “Misuse” because the law itself was drafted and the law making process was intended for putting men at workplace under severe pressure, constant threat and finally to destroy the professional and personal lives of Men. This time, none other than the Chief Justice of India, is in the line of fire of “USE” of POSH.   Firstly, an ill-intentioned law is made under feminist pressure and then social media, fame seeking, movements like #MeToo get down to the levels on #DigitalMobLynching of accused men with complete disregard to even the process of such ill-intentioned laws.   Parent movement of Men's Rights in India, Save Indian Family (SIF), had represented and opposed making of another
Read more

When Judge was Judged for giving Justice

Judge interprets Law correctly, Penalised Justice Pushpa Ganediwal of Bombay High Court (Nagpur Bench) recently gave few judgments. FEMINISTS JUDGED THE JUDGE'S JUSTICE AND JUSTIFY HER REMOVAL FROM PROMOTION TO SUPREME COURT OF INDIA. As it is, the power of Feminists in India seems to be more than even CJI. See how, CJI needs to justify their courtroom exchange now a days, which feminists objected to. There are 3 major questions that came to us for our Opinion. Thanks to the Magazine for publishing our views, but then, it is imperative to detail our responses to those questions: Q.1. Do you agree that the condition of skin-to-skin contact is justified to constitute the offence under Section 8 of the POCSO Act? Our Response : The act is clearly defined in terms of the "touch" the specific body parts as an offence under the specific section. Every Kind of a wrong touch, has a different gravity and different punishment. In the said judgment, unfortunately, the Media has re-
Read more 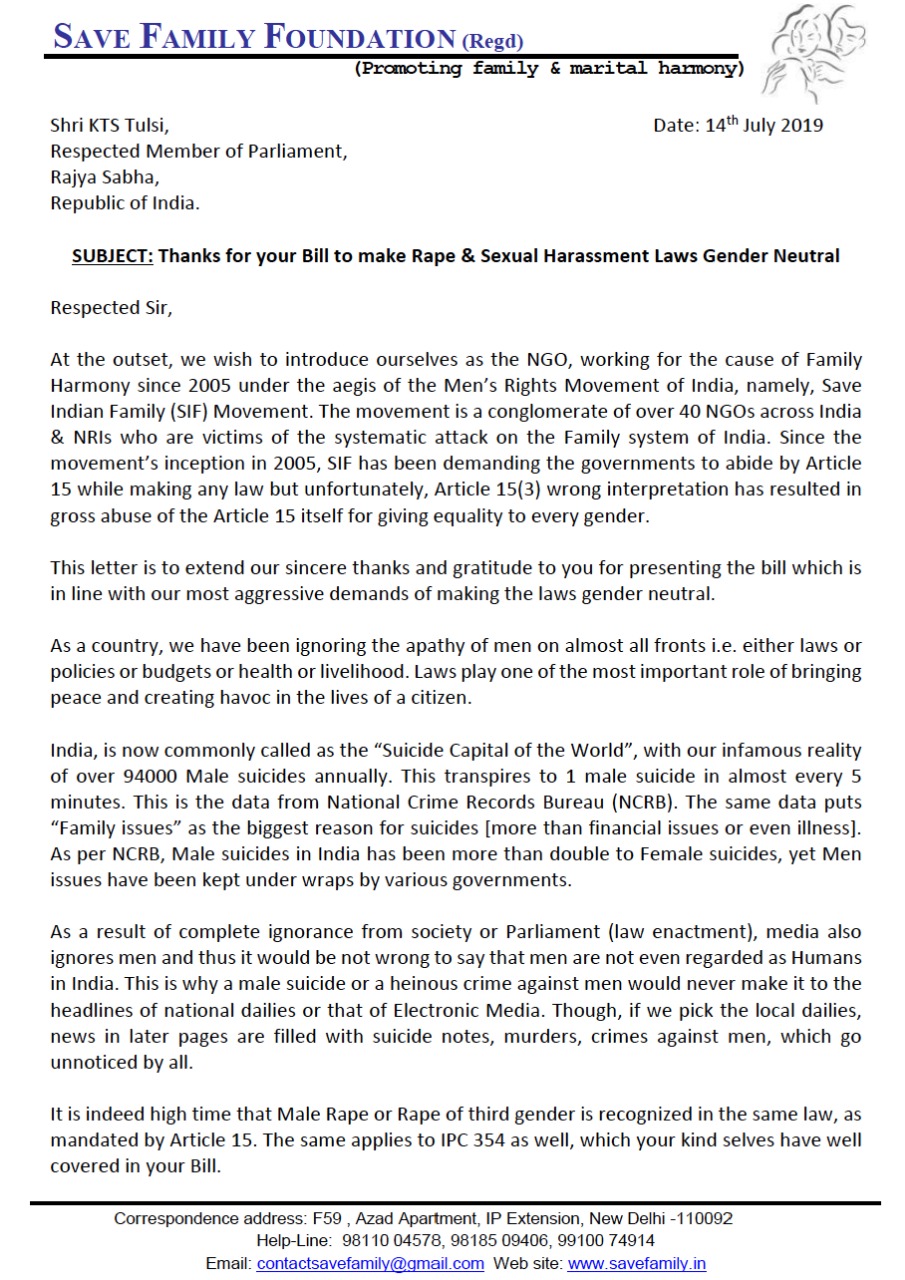 MP becomes MAN in the Parliament 2019, the year, when a Member of Parliament decided to become the MAN in the Parliament. Shri KTS Tulsi, a respected Member of Parliament from Rajya Sabha is presenting a Private Member Bill. The Private Member Bill, named, "The Criminal Law (Amendment) Bill 2019" is one of the first bills ever presented by an MP keeping the true spirit of Article 15 of the Constitution of India. Few of the Salient features of the Bills include: Amendment in IPC Section 354, 354A, 354B, 354C, 354D to replace "woman" with "person". Amendment in IPC 375 to replace "woman" with "person". Insertion of IPC 375A to sexual assault and it's punishment where inappropriate touching also is proposed to be a Bailable offence with 3 years imprisonment, in Gender Neutral Manner. Amendment in IPC 376, 376A, 376C, 376D to replace "woman" with "person". All the above amendments are suggested to
Read more